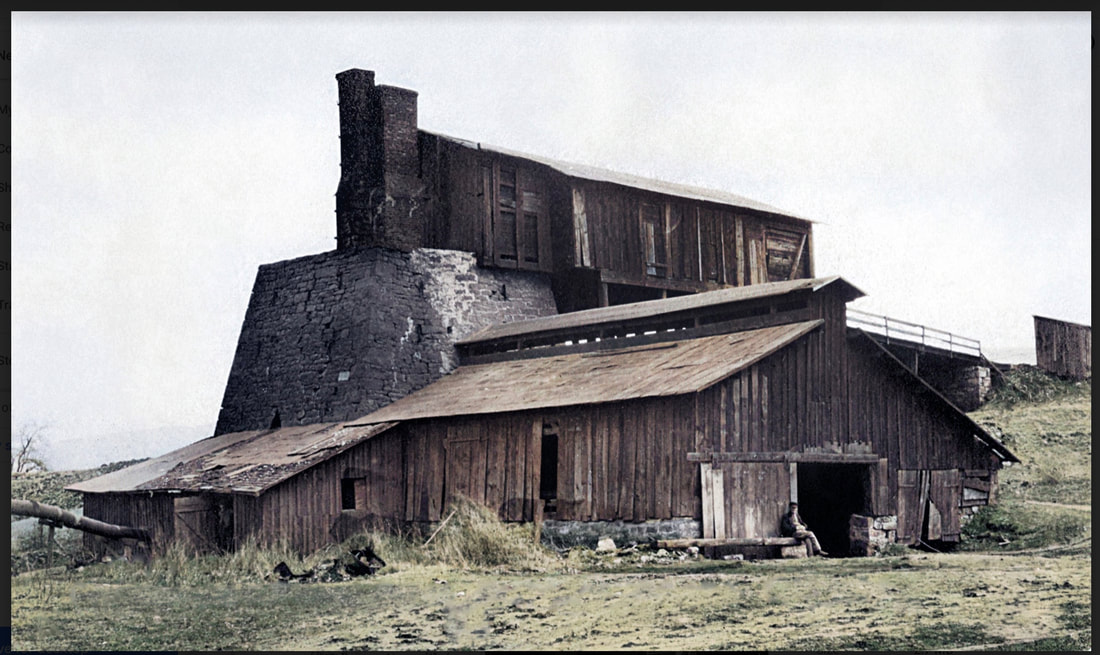 To produce iron in a charcoal-fueled cold blast furnace, the requirements were iron ore, limestone, charcoal, and water-power.  Iron ore, limestone, and charcoal were loaded into the top of the furnace.  Water-power rotated a water wheel, which in turn powered an air-compression-device and pushed pressurized air into the blasting pipe. The pressurized air moved through the pipe and entered the tuyere shed (tuyere means nozzle in French and is pronounced variously as tweer, twee-yer', or to-yer') and entered the furnace via the tuyere arch. The blast of air provides the right amount of oxygen to burn the charcoal efficiently and push the temperature inside the furnace to about 3000 degrees F, the temperature required to smelt (liquify) the ore.  Limestone serves as a flux, a substance that combines with and removes impurities from the molten ore in the form of slag.

Above is a photo c 1915 of the Eagle Iron Works.  The blast furnace is the stone column to the left of center. On the upper level to the right, you see the railing of a bridge.  It leads into the charging house, the long barn-like structure built on stilts at the height of the top of the furnace.  The ore, limestone and charcoal were collected there and pushed into the top of the furnace.  On the lower level to the left, the blast pipe is seen entering the tuyere shed. (The blast house is outside the frame.)  The larger building on the lower level in the foreground is the casting house, where the molten iron was allowed to flow from the bottom of the furnace into casts to make pig iron (called that because the lines of iron casts looked like piglets lined up to suckle).  A small portion of the pig iron might be converted directly into utensils, pots, and stoves.  Most of the pig iron was taken to the nearby forge and converted into wrought iron, which was more useful than pig iron for most manufacturing applications.  Some of the wrought iron was further processed into sheets, bars, and wire at the rolling mill.

Iron was produced at Curtin until 1921, when misfortune after misfortune struck. The furnace required expensive repairs, but remained nonfunctional.  A fire destroyed part of the mule barn.  The last straw was another fire that destroyed the charging house, the bridge, and the casting house. The forge continued in operation for a year, but the company closed in 1922.

The furnace complex in this early photo was meticulously reconstructed in the 1970s as a detailed replica of the original. Visitors can tour the furnace complex -- charging house, blast house, tuyere shed, and casting house -- and peer into the furnace.  Also on display are 19th century farm machinery, old tools, and the restored personal carriage of Pennsylvania Governor Andrew Gregg Curtin, Roland Curtin's son.